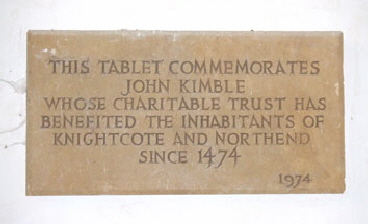 The Kimble Charity
Knightcote has a road called Kimble Close and Northend a house called Kimbles. Both are named after John Kimble, whose kindness through his will in 1469 has benefitted All Saints Church Burton Dassett (where there is a plaque to his memory) and many parishioners right up to the present day.

John Kimble (sometimes spelt ‘Kimbell’) lived in the 15th Century – a time when Burton Dassett was a prosperous market town. To give his life historical context, he lived in the reign of the so-called Boy King Henry VI and the date of his death came in the middle of the Wars of the Roses.

Little is known of Kimble’s life, but we do know he came here as an orphaned beggar boy. He asked the people of Southend (the site of an archaeological dig in the 1990s before the site gave way to the M40 motorway) for food and shelter, but was turned away. From here he went on to Little Dassett, where he met with the same harsh treatment. Then he crossed the brook (which nowadays runs under the road) and encountered kindness and hospitality from the people of Northend and Knightcote.

It would seem that the young Kimble liked the area because he stayed and became a prosperous farmer at nearby Mollington – and he never forgot the kindness shown to him by the people of Northend and Knightcote.

When Kimble died, his will set up a deed enabling the rent from his house and lands to be held in trust and used towards the upkeep of Burton Dassett Parish Church (All Saints) and for the benefit of the people of Northend and Knightcote. Not a penny of it was to go to the people on the wrong side of the brook.

Over the centuries, Courts of Chancery and Charity Commissioners have guided the trustees in their honorary duties. At one time there were eighteen trustees, but in the present day there are just eight and the Kimbell Trust (that’s the spelling used) is registered with the Charity Commission under number 240247.

Nowadays the Kimble charity has a modest income of under £5,000 per year and still distributes this in keeping with the original principles. At the beginning of January every household in 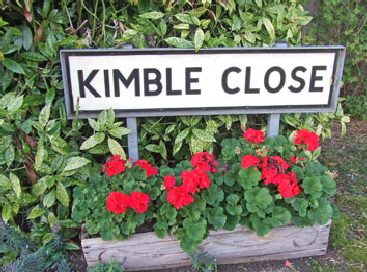 Knightcote and Northend receives a loaf of bread and All Saints Church still continues to receive a token disbursement. Poor widows and elderly people are given money at Christmas and needy people going into hospital are given a few pounds.
Kimble-Close
Kimble Close in Knightcote is just one example of the way the Kimble name lives on.
Kimble’s Will conveyed his house and lands to a Ralph Wallis and his heirs in trust “that the rent and profits thereof should be employed in the manner following: seven shillings to the use and towards the repair of the parish church of Burton Dassett, and two pence a house yearly to be given in bread to every householder in Knightcote and Northend in the name of Dole, and all the rest and residue of the said rents and profits to be employed to such uses, intents and purposes … as the inhabitants should direct and appoint.”