The first recorded history of Burton Dassett is its entry in the Domesday Survey of 1087, in which it was called Dercetone.
The area’s history goes back much further than this; the first human activity to actually be backed up by evidence dates from Saxon times. This takes the form of a Saxon burial site found on Pleasant Hill (now within Burton Dassett Country Park), which is the hill overlooking Northend. The burial site was discovered in 1908 by quarrymen, who unearthed two trenches, stretching from east to west with thirty-five skeletons lying head-to-foot. Buried with them were pottery and a Saxon sword. Their injuries were indicative of violent death and so it seems likely they died in a battle some time during the 6th or 7th Century.

Beginning of All-Saints Church
The first Burton Dassett church pre-dates the Domesday Survey, which chronicles the existence of a small church. This occupied an area covered by the nave of the present church. Under Norman rule the Saxon Lord Harold de Sudeley (whose principal seat was at Sudeley in Gloucestershire) was allowed to keep the 1800 acres of land he held in these parts. The other landowner was the Earl of Mellent who held 600 acres. The parish consisted of Great Dassett, Little Dassett, Northend, Southend, Knightcote (which had a chapel and a priest) and Hardwick, where the DSDA Army Camp now stands. The population was around 350.

The huge north and south doorways are the oldest parts of Burton Dassett (All-Saints) Church and probably date from Harold de Sudeley’s time. As the de Sudeley family continued to prosper, its 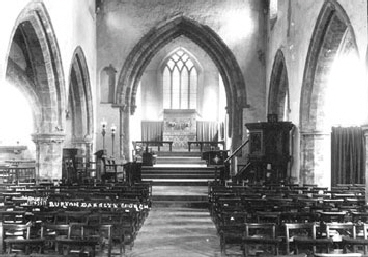 interest in the church and village continued. The church’s chancel arch dates from the time of Ralph de Sudeley, grandson of Harold. This is typically transitional Norman and dates from the late 12th Century.

Market, Pillory and Gallows
In the 12th and 13th Centuries the centre of population shifted downhill to the villages of Northend and Southend and in the 13th Century there were further advances in the parish’s prosperity. King Henry III granted permission for a market to be held every Friday and an Annual Fair for three days from the eve of St. James the Apostle. The market led to Southend also being known as Chipping Dassett. In 1279 John de Sudeley was elevated to the position of Baron by King Edward I and given even more privileges, including the holding of a Court Leet, rights of Gallows, Cuckstool, Pillory and Assize of Bread and Beer.

Burton Dassett continued to prosper and in 1332 paid the King’s Treasury taxes amounting to more than a quarter of those paid by the city of Coventry. At this time John de Sudeley and his nephew and heir, Thomas Boteler, enriched and enlarged the church even more. This included the installation of a stained glass window, showing the de Sudeley arms, which survived until the 18th Century. 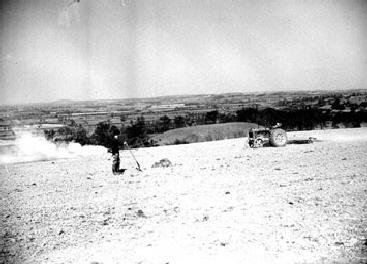 Thomas Boteler’s grandson, Ralph, became Bodyguard and Standard Bearer to King Henry VI and was later made Lord Treasurer of England and created Baron Sudeley. However, he died childless, so his property was divided between his two sisters. Burton Dassett came to Hamon Belknap, husband of Joan Sudeley and the manor was owned by three generations of Belknaps. The last of these was Sir Edward, who is universally regarded as the worst owner in Burton Dassett’s history.

Tenant Farmers Evicted
Sir Edward Belknap lived at Weston-under-Wetherley and his only interest in Burton Dassett was in making as much money from it as possible. The wool trade was thriving and the Burton Dassett Hills and their surrounds were ideal for sheep rearing. From the village of Southend (where the M40 Motorway now stands) Belknap turned out twelve tenant farmers and their families and enclosed 600 acres of land for sheep grazing. Some of them took refuge in Northend but Southend, already reeling from population depletion through the Black Death, ceased to exist.

The only beneficial act Belknap is credited with was to build the stone Beacon Tower that is still the focal point of the Burton Dassett Hills. It seems likely this was a signalling tower on top of which would have been a cressett in which to light a signal fire in times of emergency. The de Sudeleys had a cresset in their crest and Belknap’s stone tower almost certainly replaced earlier, less permanent ones. It is now a national monument.

Edward Belknap died in France in 1520, whilst a Captain in the Army, leaving his four sisters as his heirs. Two of their grandsons sold Burton Dassett to Peter Temple of Leicestershire. Peter died in 1577 and he and his wife are buried in the alabaster tomb in the north transept of Burton Dassett Church.

John, son of Peter Temple, acquired the manor of Stowe in Buckinghamshire, which later became the Temple family’s main seat. He died in 1603 and a memorial to him, bordered with the colourful coats of arms of his children, can still be seen in Burton Dassett Church.

Catholic Persecution
The other branch of the Belknap family lived in Northend Manor and were also significant local landowners through inheritance. Sir Robert Wootton, grandson of Ann Belknap, married Lady 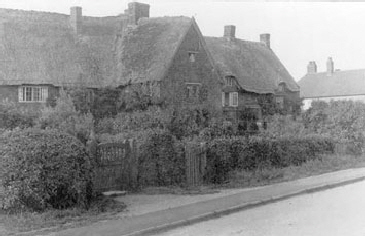 Mary Throckmorton of the staunch Catholic family at Coughton Court. She converted the medieval chapel at Little Dassett (now itself a house but, until recently, used as a cattle shelter and known as Chapel Barn) for her own use and had her resident priest accommodated in rooms attached. This was both daring and hazardous in the Cromwellian era and her family was already being heavily fined for being Roman Catholic. The Civil War years saw Burton Dassett folks witnessing the war’s very first battle at neighbouring Edgehill in 1642. Some say the Parliamentarians stabled horses at Burton Dassett Church and that Oliver Cromwell viewed the battle from the Burton Dassett Hills, but all this seems very unlikely.

In May 1646 Burton Dassett’s vicar, Robert Kenwrick, left the area to join the King’s Horse. Two months later, following the surrender of the Royalist Headquarters at Oxford, Nathaniel Partridge was sent to Burton Dassett as Puritan Minister. His successor, Thomas Mansell, was such a good Christian that he was loved and accepted by all and remained until after the Restoration. 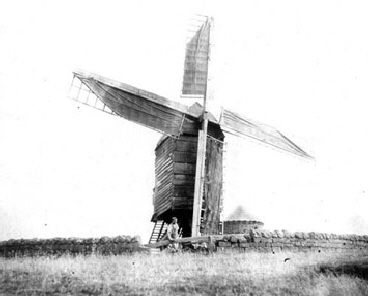 Windmills
In 1655 the windmill that stood next to the Beacon was destroyed in a freak storm, killing the miller who had come up from Northend to turn the sails from the wind. This was replaced by a wooden post windmill which blew down in another storm as recently as 1946 and has not been replaced.

By 1890 Burton Dassett Church was in a dangerous state and a historically-minded architect called J. Cossins was brought in to restore it. The rotting floor boards he removed revealed the seven different floor levels, the steps and beautiful medieval tiles. He also found the 13th Century doorway and staircase to the loft. The walls and roof were repaired and all was well for a while.
Then, in 1934, extensive roof leaks led to the disturbing discovery that the church walls were made of hard mud and then faced inside and out with stone. The same construction method was used for the 60-foot tower. The transept walls were bulging because the mud in the middle of the sandwich was swelling with water from the leaking roof. There were other structural problems, too, including Deathwatch Beetle in some of the old timbers. An appeal was launched and repairs were undertaken until the money ran out in 1937. Since then, running repairs have had to suffice. However, beautiful medieval wall paintings uncovered over the chancel arch in 1966 were restored in 1968 thanks to a grant from the Pilgrim Trust.

In November 1943 a United States Air Force B17F Flying Fortress bomber (on its way to Bremen in Germany) encountered trouble and fell from the sky over Northend in poor weather conditions. 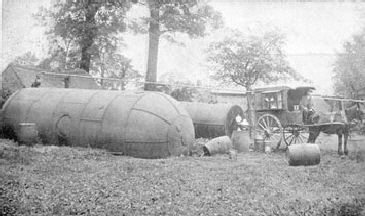 It exploded and broke up in mid-air before crashing in a blaze on open farmland between Northend and where the M40 Motorway now runs. All ten crew members were killed. 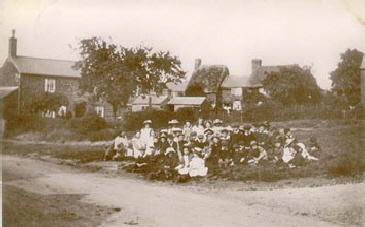 Northend School served the villagers of Northend and Knightcote from around 1885 until it’s closure during the schools reorganisation of South Warwickshire in July 1996. During the hundred or so years that it was in existance it regularly housed up to 80 children from the surrounding villages.  Children of primary age now attend The Dassett School in Fenny Compton.